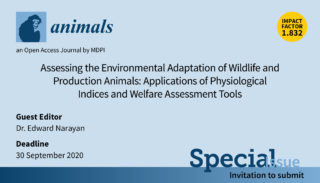 Special Issue of the journal “Animals”

This Special Issue welcomes experimental research papers that demonstrate the applications of physiological indices and welfare assessment methods (e.g., morphological and morphometric data, behavioural assessments, thermal profiles, and physiological markers) in any wildlife or production animal (e.g., rescued and rehabilitating animals, pets, competition animals, farm animals and zoo animals), in response to environmental and management related factors. The goal is to provide examples of new research and techniques that can be used to monitor short- and long-term environmental adaptation of animals under human care.

Special Issue of the journal “Australian Journal of Zoology” by CSIRO

Physiological responses to climate change: What can we learn from Australasian animals?

The Australian Journal of Zoology is planning a special issue that deals with how Australasian animals have coped with a variable climate and how that may influence their ability to deal with man-made climate change.  As the comparative physiologists have studied aspects of this in various taxa, we thought this would be an opportunity for people to put their work together to serve a larger audience in both Australasian science, but also to highlight the advantages of the responses of animals that have had to deal with climate variability for generations.  Work can be on any taxa and can include responses to fire, cyclones, drought or even normal year-to-year variability that occurs within the local regions. At the moment, we anticipate the submission of papers to be by mid-year 2020, with publication on-line as soon as accepted and the printed version out in early 2021

Special Issue of the journal “Frontiers in Physiology”

This Research Topic will aim to compile the recent knowledge and advances concerning mechanisms of energy saving in the context of a constantly changing environment, as well as the ecological and evolutionary implications of such strategies for individual’s life and animal’s populations. The focus is on behavioral and hypometabolic responses, and thermal tolerance that enable animal species, from endotherms to ectotherms, to regulate their energy balance, and to optimize energy allocation to fitness components. The different approaches describing these mechanisms may range from the whole organism or even a group of organisms to cellular or molecular levels. 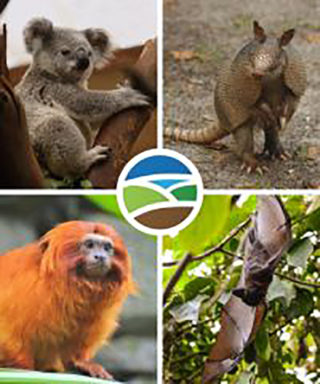 Conservation of Southern Hemisphere Mammals in a Changing World

In addition to warming associated with climate change, much of the southern hemisphere will experience increased aridity and frequency of droughts. The physiological welfare of mammals in the region is likely to be severely challenged by the resulting stressors of increasing water shortage, food shortage and heat. The survival of many species also will be further threatened by over-harvesting, habitat degradation and altered trophic interactions. An improved understanding on the physiological responses of southern hemisphere mammals to a changing world is required if we are to assess their vulnerability and implement appropriate conservation actions. 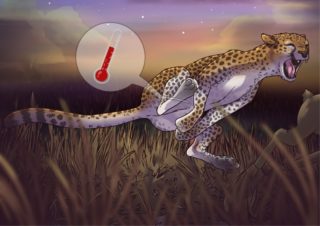 Abstract: As one of the few felids that is predominantly diurnal, cheetahs (Acinonyx jubatus Von Schreber, 1775) can be exposed to high heat loads in their natural habitat. Little is known about long‐term patterns of body temperature and activity (including hunting) in cheetahs because long‐term concurrent measurements of body temperature and activity never have been reported for cheetahs, or indeed for any free‐living felid. We report here body temperature and locomotor activity measured with implanted data loggers over seven months in five free‐living cheetahs in Namibia. Air temperature ranged from a maximum of 39ºC in summer to −2ºC in winter. Cheetahs had higher (∼0.4 ºC) maximum 24h body temperatures, later acrophase (∼1 h), with larger fluctuations in the range of the 24h body temperature rhythm (∼0.4 ºC) during a hot‐dry period than during a cool‐dry period, but maintained homeothermy irrespective of the climatic conditions. As ambient temperatures increased, the cheetahs shifted from a diurnal to a crepuscular activity pattern, with reduced activity between 9:00 and 15:00 and increased nocturnal activity. The timing of hunts followed the general pattern of activity; the cheetahs hunted when they were on the move. Cheetahs hunted if an opportunity presented itself, on occasion they hunted in the midday heat or in total darkness (new moon). Biologging revealed insights into cheetah biology that are not accessible by traditional observer‐based techniques. 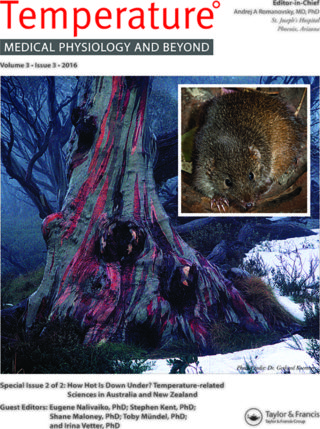 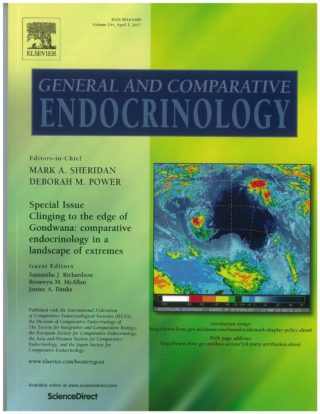 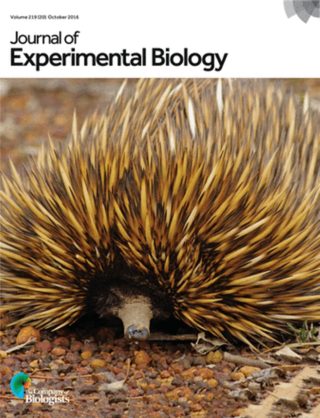 The private life of echidnas: Using accelerometry and GPS to examine field biomechanics and assess the ecological impact of a widespread, semi-fossorial monotreme.

Abstract: The short-beaked echidna (Tachyglossus aculeatus) is a monotreme and therefore provides a unique combination of phylogenetic history, morphological differentiation and ecological specialisation for a mammal. The echidna has a unique appendicular skeleton, a highly specialised myrmecophagous lifestyle and a mode of locomotion that is neither typically mammalian nor reptilian, but has aspects of both lineages. We therefore were interested in the interactions of locomotor biomechanics, ecology and movements for wild, free-living short-beaked echidnas. To assess locomotion in its complex natural environment, we attached both GPS and accelerometer loggers to the back of echidnas in both spring and summer. We found that the locomotor biomechanics of echidnas is unique, with lower stride length and stride frequency than reported for similar-sized mammals. Speed modulation is primarily accomplished through changes in stride frequency, with a mean of 1.39 Hz and a maximum of 2.31 Hz. Daily activity period was linked to ambient air temperature, which restricted daytime activity during the hotter summer months. Echidnas had longer activity periods and longer digging bouts in spring compared with summer. In summer, echidnas had higher walking speeds than in spring, perhaps because of the shorter time suitable for activity. Echidnas spent, on average, 12% of their time digging, which indicates their potential to excavate up to 204 m3 of soil a year. This information highlights the important contribution towards ecosystem health, via bioturbation, of this widespread Australian monotreme. 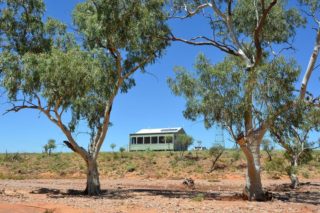 See ABC News article about the Gap, a very important site for many ANZSCPB members, and the location for several memorable annual Society conferences. 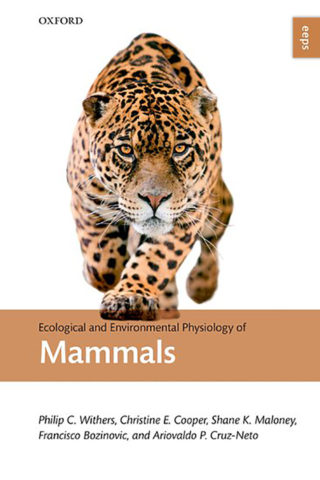 Ecological and Environmental Physiology of Mammals

Mammals are the so-called “pinnacle” group of vertebrates, successfully colonising virtually all terrestrial environments as well as the air (bats) and sea (especially pinnipeds and cetaceans). How mammals function and survive in these diverse environments has long fascinated mammologists, comparative physiologists and ecologists.

Ecological and Environmental Physiology of Mammals explores the physiological mechanisms and evolutionary necessities that have made the spectacular adaptation of mammals possible. It summarises our current knowledge of the complex and sophisticated physiological approaches that mammals have for survival in a wide variety of ecological and environmental contexts: terrestrial, aerial, and aquatic. The authors have a strong comparative and quantitative focus in their broad approach to exploring mammal ecophysiology. As with other books in the Ecological and Environmental Physiology Series, the emphasis is on the unique physiological characteristics of mammals, their adaptations to extreme environments, and current experimental techniques and future research directions are also considered.

This accessible text is suitable for graduate level students and researchers in the fields of mammalian comparative physiology and physiological ecology, including specialist courses in mammal ecology. It will also be of value and use to the many professional mammologists requiring a concise overview of the topic. 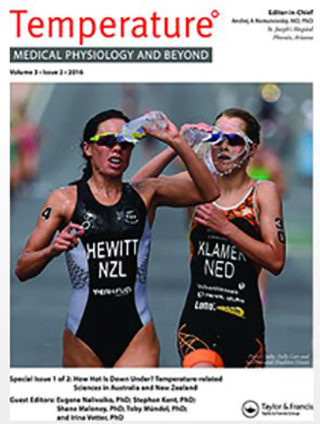 Abstract: Here, we propose an original approach to explain one of the great unresolved questions in animal biology: what is the function of sleep? Existing ecological and neurological approaches to this question have become roadblocks to an answer. Ecologists typically treat sleep as a simple behavior, instead of a heterogeneous neurophysiological state, while neuroscientists generally fail to appreciate the critical insights offered by the consideration of ecology and evolutionary history. Redressing these shortfalls requires cross-disciplinary integration. By bringing together aspects of behavioral ecology, evolution, and conservation with neurophysiology, we can achieve a more comprehensive understanding of sleep, including its implications for adaptive waking behavior and fitness. 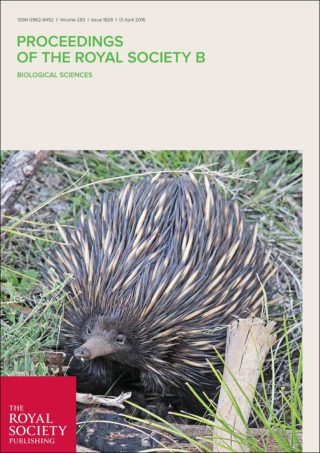 Abstract: Fires have occurred throughout history, including those associated with the meteoroid impact at the Cretaceous–Palaeogene (K–Pg) boundary that eliminated many vertebrate species. To evaluate the recent hypothesis that the survival of the K–Pg fires by ancestral mammals was dependent on their ability to use energy-conserving torpor, we studied body temperature fluctuations and activity of an egg-laying mammal, the echidna (Tachyglossus aculeatus), often considered to be a ‘living fossil’, before, during and after a prescribed burn. All but one study animal survived the fire in the prescribed burn area and echidnas remained inactive during the day(s) following the fire and substantially reduced body temperature during bouts of torpor. For weeks after the fire, all individuals remained in their original territories and compensated for changes in their habitat with a decrease in mean body temperature and activity. Our data suggest that heterothermy enables mammals to outlast the conditions during and after a fire by reducing energy expenditure, permitting periods of extended inactivity. Therefore, torpor facilitates survival in a fire-scorched landscape and consequently may have been of functional significance for mammalian survival at the K–Pg boundary. 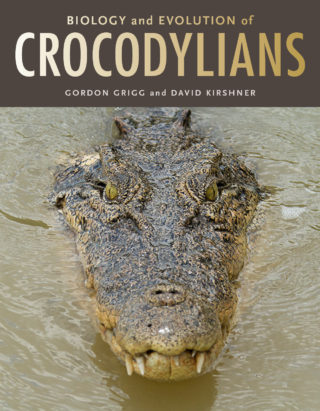 Biology and Evolution of Crocodylians

Biology and Evolution of Crocodylians is a comprehensive review of current knowledge about the world’s largest and most famous living reptiles.

Gordon Grigg’s authoritative and accessible text and David Kirshner’s stunning interpretive artwork and colour photographs combine expertly in this contemporary celebration of crocodiles, alligators, caimans and gharials. This book showcases the skills and capabilities that allow crocodylians to live how and where they do. It covers the biology and ecology of the extant species, conservation issues, crocodylian–human interaction and the evolutionary history of the group, and includes a vast amount of new information; 25 per cent of 1100 cited publications have appeared since 2007.

Richly illustrated with more than 500 colour photographs and black and white illustrations, this book will be a benchmark reference work for crocodylian biologists, herpetologists and vertebrate biologists for years to come.